The feeds presented in these tables are ingredients (also called feedstuffs, feedingstuffs, feed materials, or straights in English) used in compound feeds. Most of these feeds are common products, but some less conventional feeds, such as new feeds (insects...) as well as feeds used in tropical regions, have been included. The tables do no include forages and pastures. The feed names are those used in the feed trade. However, because feeds can be highly variable due to differences in genetics, cultivation, harvest and post-harvest conditions, and processing, more restrictive names based on the composition (typically protein, crude fibre and fat) have been created to provide profiles better suited to formulation.

The chemical data used to calculate the values shown in the tables are obtained from analyses performed in private and public laboratories specialised in feed analysis (mostly in France and Western Europe). Analytical methods are those recommended by international and national standards organisations (such as ISO and AFNOR) and by other institutions (such as the European Commission and AOAC). In some cases, data are obtained by methods similar to or derived from standard ones, and by methods recommended by certain authors (such as those developed by Van Soest). Whenever possible, chemical compositions are established from data that are both recent (obtained in the past ten years) and available in sufficient numbers to allow critical evaluation. When such data are not available, data from the scientific literature are used instead. This is notably the case for vitamins and for part of the trace elements and fatty acids. The table below summarizes the main methods used to measure the chemical characteristics published in the tables.

Gross energy is measured by calorimetry or predicted from the chemical composition. In the tables, gross energy values are obtained using the following equation, which resulted from a statistical analysis carried out on more than 2000 gross energy values (Tran and Sauvant, 2000, unpublished):

Δ values are presented in the following table:

For maize starch and brewers grains, the equation proposed by Noblet (personal communication, 2002) was used:

Abbreviations and units are the same as in the previous equation. The Residue is the difference between organic matter and the sum of the other constituents in the equation.

Some analytical parameters are more frequently measured than others, and, as a result, the number of observations available for calculations differs widely between parameters. For instance, crude protein values are much more common than amino acids values ; likewise, crude fibre values are much more common that Van Soest fibre values. When table values are calculated by averaging data sets of different sizes, this may result in inconsistent profiles: because of a lower number of raw values, the average ADF, for instance, will not correspond to the average crude fibre, which will result in turn in inconsistent energy values if the latter are calculated from equations based on ADF. In order to prevent these inconsistencies, thousands of regression equations between chemical parameters, most of them specific to a feed or group of feeds, have been established or collected from the scientific literature, and used to predict, for instance, fibre values and amino acid values consistent with the crude protein content.

The nutritional data (energy, protein and mineral bioavailability values) are calculated according to state-of-the-art feed evaluation systems. These systems use equations specific to each animal species, which are described in the corresponding sections:

The nutritional values are calculated to be consistent with the chemical composition, using equations derived from the statistical analysis of large data sets including in vivo and chemical data collected from INRA or from the scientific literature. The perimeter of these equations can be a single feed or a group of feeds. The input of these equations are the chemical data established previously. Many of these equations use cell wall constituents (crude fibre, NDF, ADF or lignin) as predictors, but other parameters are taken into account depending on the species, the feeds and the characteristics to be predicted. When relevant equations are not available, average values were used instead. When neither equations nor original data were available, nutritional data were derived from previous tables.

Gross energy is not fully available to the animal: part of it is lost in faeces, urine, methane and heat increment. These losses can be estimated to provide energy values that represent the amount of energy actually used by the animal.

The figure below illustrates the different types of feed energy. 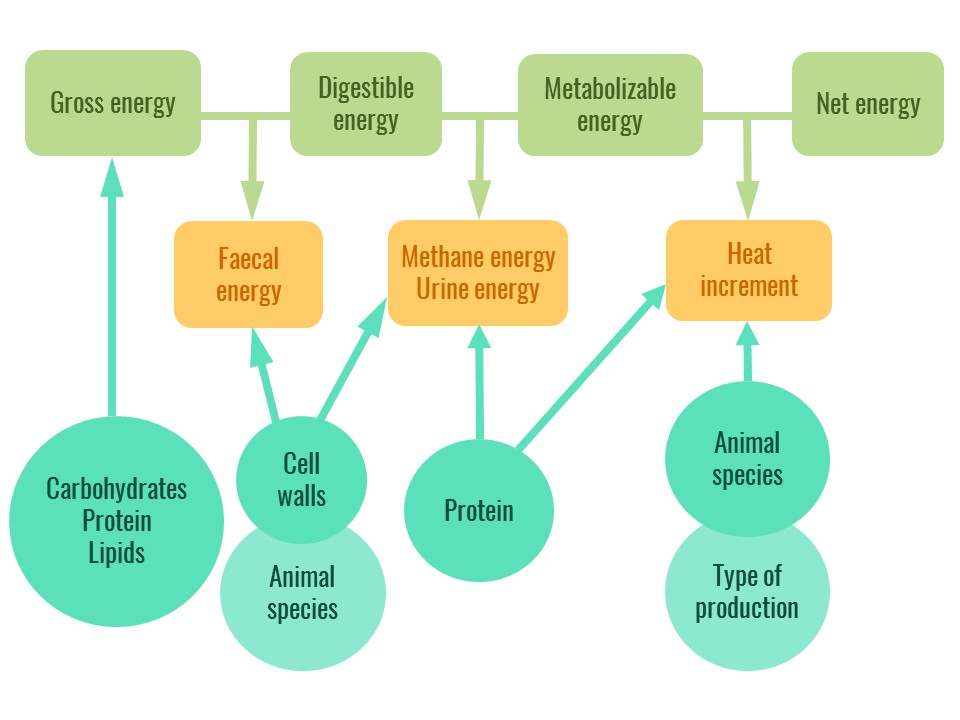 The digestibility of energy (or of organic matter) can often predicted from the chemical composition, and particularly from the cell wall content ("fibre"), which is usually negatively correlated to it. These relationships depend on the animal species, as shown in the figure below. 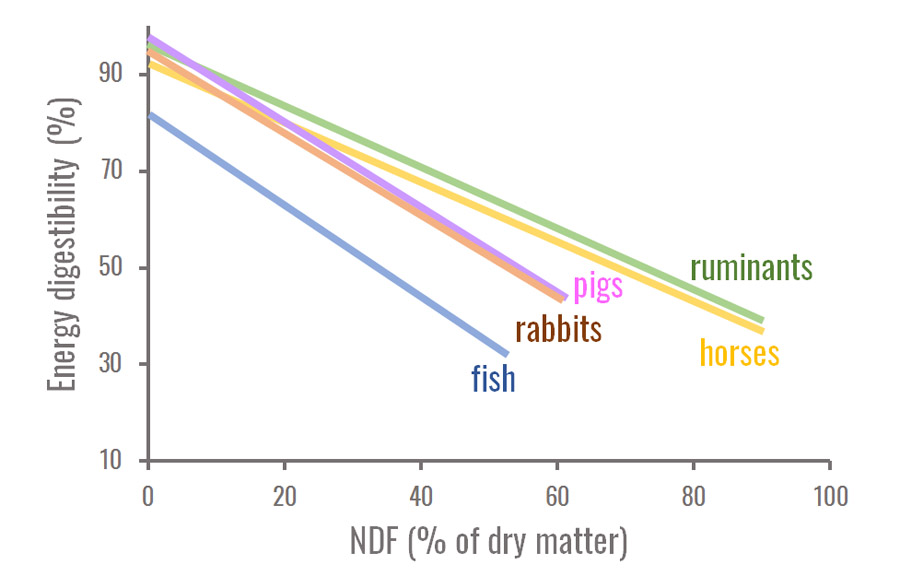 Figure 2. Comparison of the influence of cell wall content on energy digestibility for several species

DE is calculated as GE x energy digestibility, and ME and NE values are subsequently calculated using equations specific to each animal species that take into account the composition of the feed, the type of production and the physiological status of the animal (growing vs adult animal, milk vs meat production). The calculation processes are described for each species in the relevant sections.

Due to the differences between species concerning the digestive and metabolic use of ingested nitrogen, more or less elaborate estimations of nitrogen value are provided for each animal species, described in the corresponding sections.

The majority of phosphorus contained in plant storage organs is in a form bound to phytic acid (myo-inositol hexaphosphoric acid). The release of this phosphorus requires enzymatic hydrolysis by a phytase. Phytate phosphorus is not available for monogastric animals because they do not possess sufficient intestinal phytase activity to hydrolyse the phosphate groups of this molecule. Therefore, a large part of the phytate phosphorus is not used and can be found in the excreta. However, it is possible to improve its availability by adding exogenous phytases to the feed. In addition, plant phytases contained in some feed materials, such as wheat, can hydrolyse the phytate phosphorus in the other diet ingredients (Nys et al., 1997). This problem is less important for ruminants since the microorganisms in the rumen produce phytases.

The tables present three types of nutritive values for phosphorus:

The tables present the relative biological value (RBV) of the major sources of minerals (mineral products and organo-metallic complexes) used in Europe for pigs, poultry and ruminants. This review was performed by a group of experts commissioned by the EMFEMA using all the available literature data.

The environmental impact data have been produced through ECO-ALIM, a French project led by IFIP and funded by ADEME and the French ministry of agriculture. IFIP, Arvalis, Terres Inovia and INRA collaborated with the feed industry (SNIA, Coop de France Animal nutrition, AFCA-CIAL and feed manufacturers) to produce environmental data suitable for inclusion in least-cost feed formulation with a goal to reduce the environmental impact of livestock feeds and of the resulting animal products (meat, milk, eggs).

The environmental impact values of feeds were assessed by Life Cycle Analysis and are expressed per kilogram of feed. 6 parameters are included:

The characterization method CML-IA (Guinée et al. 2002) was chosen for the calculation of eutrophication and land use and ILCD method for Climate Change (CC), acidification (AC) and cumulative energy demand (CED).